When Lia Thomas won the women’s NCAA swim meet in 2018, she became the first openly transgender athlete to win a Division I national championship. Her victory is notable not only as an example of significant progress for transgender people and their rights but also because this was her second-straight title and marks what may be the start of a new era in American swimming history. 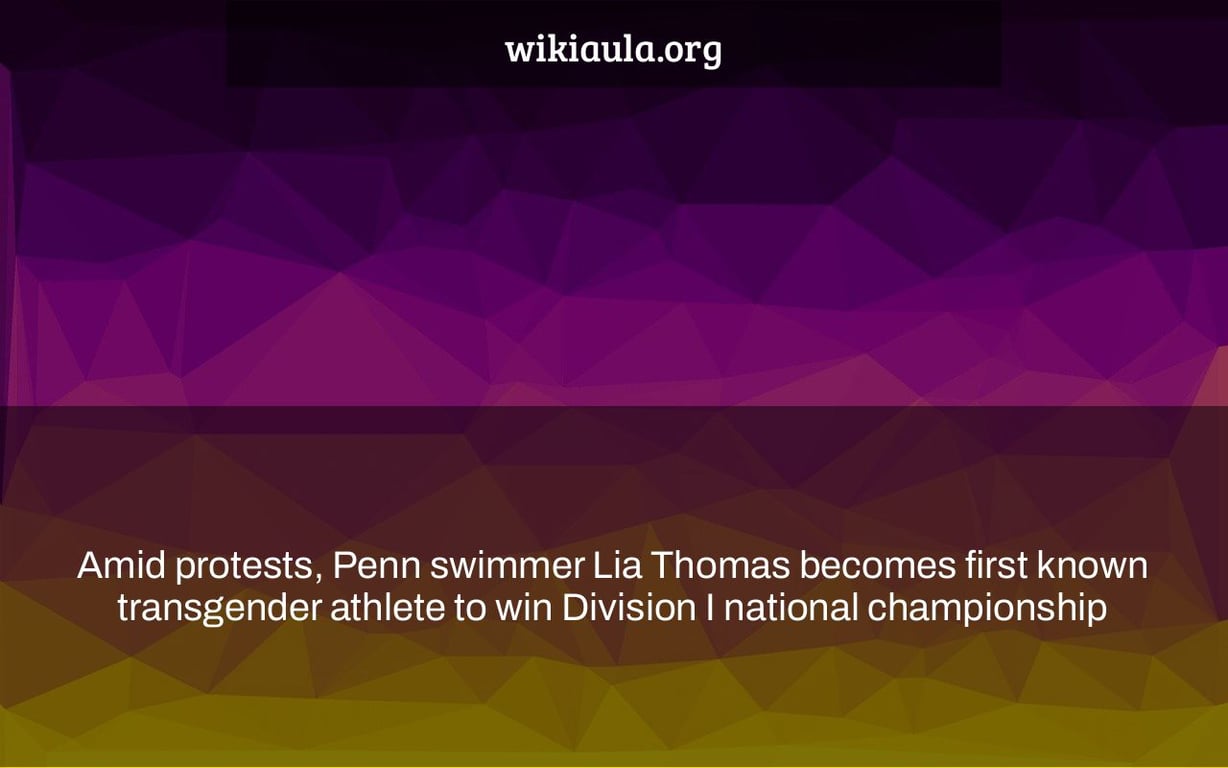 ATLANTA, Ga. — Lia Thomas is a national champion in the sport of gymnastics.

On Thursday night, Thomas, a transgender woman, hit the wall in the 500-yard freestyle in 4 minutes, 33.24 seconds to become the first known transgender athlete to win a Division I national title in any sport.

Thomas finished 1.75 seconds ahead of Virginia’s Emma Weyant in second place. Thomas’ performance was a season best and a fraction of a second faster than Katie Ledecky’s 4:24.06 mark.

The race started with the audience shouting for each of the swimmers, but Thomas’ debut was particularly quiet. Beth Stelzer, the founder of Save Women’s Sports, hung a vinyl banner with the organization’s slogan over the fence.

Olympians Brooke Forde (Stanford), Erica Sullivan (Texas), and Weyant alternated testing Thomas throughout the race. Thomas had the lead early on, but was overtaken by Sullivan and trailed for the most of the first half. In the second half of the race, Thomas and Weyant were neck and neck, but Thomas broke away in the last 150 yards to win her maiden national title.

“It means the world to be here,” Thomas remarked after the race in an interview with Elizabeth Beisel.

Thomas informed Beisel that she had been attempting to filter out the distractions after declining to attend the NCAA-mandated postrace press conference. “I try to put that out of my mind as much as possible,” Thomas remarked. “I try to concentrate on my swimming and the preparations I need to make for my races. And just try to tune everything else out.”

She flashed a peace sign as she stood on the stage with her trophy, exactly like she had done for her four Ivy League titles. As she was declared as the champion, the audience was notably silent once again.

Thomas will compete in the 200-yard freestyle prelims on Friday morning. On Saturday, she will also participate in the 100-meter dash.

“It’s a representation of Lia’s tenacity,” Schuyler Bailar, who was the first known transgender male to play on a Division I men’s team at Harvard, told ESPN. “I believe her resilience is shown by her ability to turn up here despite protestors outside and people yelling and booing her. It’s also a reminder that we can be ourselves while doing what we love.”

After the Cavaliers won the 200 freestyle relay, Virginia junior Lexi Cuomo stated, “Any hatred is needless.” “We need to take a look at it since we’re all competitors at the moment. We’re concentrating on ourselves and our group. Our primary aim is to win a national championship.”

Thomas gained national recognition after setting national records in the 200 and 500 freestyle events at the Zippy Invitational in Akron, Ohio in December. Her swimming accomplishments earned both acclaim and criticism. In Atlanta, some of that criticism was on plain show.

Dueling demonstrations dominated the morning outside the McAuley Center. Outside, more than 20 protestors from Save Women’s Sports and Young Women for America (the collegiate wing of Concerned Women for America) yelled against Thomas being included in the women’s category.

Idaho state Rep. Barbara Ehardt, the bill’s author, was also present. The first legislation prohibiting transgender athletes’ ability to participate in sports based on their gender identification was HB 500. It has subsequently been halted by a federal judge.

Young Women for America’s national director, Annabelle Rutledge, stated, “We’re not going to stand by and watch women be displaced.” “We have to stand up for their rights.”

On Thursday, Concerned Women for America stated that it has filed a Title IX lawsuit against the University of Pennsylvania. CWA claims that allowing Thomas to participate on the women’s team is a violation of Title IX.

“The future of women’s sports is in jeopardy, and female athletes’ equal rights are being violated,” said CWA president and CEO Penny Nance in a statement. “In reaction to this injustice, we filed a formal civil rights lawsuit against UPenn.”

This isn’t the first time CWA has filed a Title IX lawsuit in reaction to a notable transgender athlete. CWA filed a Title IX complaint with the Department of Education’s Office for Civil Rights (OCR) after Franklin Pierce University (FPU) track runner CeCe Telfer won a Division II national title in the 400m hurdles in 2019. FPU’s transgender inclusiveness policy was determined to be in violation of Title IX by the OCR, and the school was compelled to revoke it. CWA’s newest complaint has yet to get a response from the Department of Education.

A dozen counterprotesters, all Georgia Tech graduate and undergraduate students, were on the other side of the street from Save Women’s Sports and CWA.

Another counterprotester, who only wanted to be identified by her first name, expressed her support for Thomas.

“I’m hoping for the best for her. I’m delighted for her “Em expressed her thoughts. “Good luck in your endeavors, young lady. Obtain them.”